The Gold Rush – Impact and Expansion

Students will learn about various gold rushes, including the California, Colorado, and Alaska Gold Rushes. 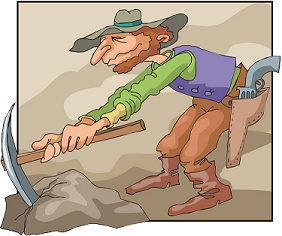 1 class period for reading, discussion, and completion of chart. The report and visual aid will require another 3-5 class periods.

Gold was first discovered in Northern California, very close to the city of San Francisco. The actual location of the discovery was Sutter’s Mill at a place where the American and Sacramento Rivers come together near the Sierra Nevada mountain range. James Marshall, who had been hired by John Sutter to build a sawmill on his land, was the first to find a golden nugget on January 28, 1848. After testing it, he learned that it was indeed real gold. Although he only told a few people because he wanted to keep his finding a secret, this was not to be.

Throughout 1848 the news spread, at first locally, and then throughout the state, the country, and the world. The news started a frenzy in which people madly rushed to California to search for gold and instant wealth. Throughout 1849, people came from all over to search for gold, often traveling thousands of miles and facing terrible hardships along the way. The “49ers,” as they were called, came by land and by sea; both U.S. citizens and immigrants came in search of wealth and opportunity. By the time that the majority of the prospectors had arrived, however, they found that most of the gold had already been taken.

Many young people graduate without a basic understanding of money and money management, business, the economy, and investing. We hope to help teachers, parents, individuals, and institutions teach these skills, while reinforcing basic math, reading, vocabulary, and other important skills.